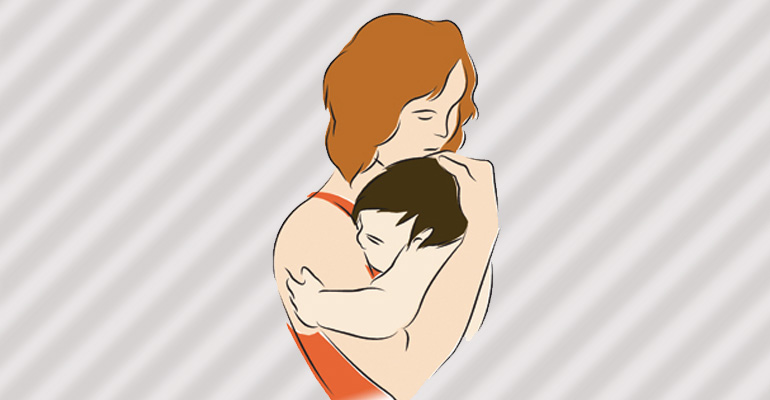 I had just earned my ticket out of babydom when I headed back for another round, courtesy of a baby girl from China. But I got more than I expected: After the tears of Gotcha Day dried, Sophia bonded to me with the intensity of a stalker.

When she looked at me, her face contorted with a desperation akin to terror. This was not love; it was need. My first 36 hours with her were spent holding her until my shoulder locked and my legs gave out. If I didn’t console Sophia in the way she desired, she melted into a puddle of despair. She seemed stuck at the point of her abandonment, a newborn in a nine-month-old’s clothes.

Sophia screamed whenever she saw me and screamed again if I left her sight. Her insatiable need took its toll. I winced when she looked for me.

I hid in bathrooms to give my husband, Steve, an opportunity to bond. I begged for time alone, to regroup before another assault. I wanted to give her my love, but her demands drained me.

Then there was Steve, who wanted nothing more than to comfort his new daughter. However, Sophia had had no experience with men during her brief life before meeting us, so she screamed whenever he reached for her. Her rejection was incredibly difficult for Steve, especially when he saw me running out of reserves.

I soon realized that I was not equipped to handle this. I read everything I could about attachment disorder, but all the books and articles were about drawing out stony, reserved children, not about surviving baby panic attacks.

I haunted adoption bulletin boards, but only a few parents were honest enough to admit their own adjustment problems. Steve and I were reluctant to confide in our social worker. After all, our questions might make her think there was a serious problem with us, and she might take our daughter away.

It was during this quiet, desperate stage that I remembered having attended a presentation about attachment disorder by Dr. Jeanne Howard, a professor from Illinois State University. I e-mailed her for help.

Dr. Howard suggested an approach based on insights from psychologist Vera Fahlberg, author of A Child’s Journey Through Placement. “Respond to newly placed children the way you would to children whose parents were just killed in a car accident,” wrote Dr. Howard. “They have been traumatized. Everything familiar is gone — their trusted caregivers, the sounds, sights, smells that they associate with safety. What is joy to us is terror to them.”

Howard’s reply helped me realize that Sophia was at a complete loss in her new world, and her behavior began to make sense. She had chosen me as her One Familiar Thing, the reference point to whom she could turn as her world spun wildly. I had to be strong for her until she could form her own memories and habits of a safe life with us.

There was a slight problem with putting this into practice. After a month of screams, my nerves were shot. I doubted I could be the source of sweetness and light to this child. Still, Dr. Howard insisted that Sophia had to feel safe with me before she would reach out to others. “Once she feels really, truly safe with you, she will let you out of her sight,” she wrote.

The thought of a day with no screams was strong motivation for me, so I began a concerted effort to pour more love into our little girl. It wasn’t easy. Sophia could sense my tension, and translated that feeling as “Mommy’s going to leave me, I must scream.” But, in a few days I began to relax. Sophia began to sense more calm in me, and that soothed her a little bit.

I played with her constantly, held her and stroked her cheeks. I had tickle parties with her and my oldest daughter, Maria. Maria’s joyful giggling was irresistible, and Sophia began to respond in kind. These tickle fests also let the love and confidence I felt for Maria overflow onto Sophia.

I established routines so that Sophia could see that life had predictable patterns. I did everything possible to remain in her line of sight, even in the bathroom. I shared her with Steve whenever she would permit. We were delighted when Sophia let Steve put her in the bath, and she splashed with Daddy until the ceiling dripped.

Two months later, I couldn’t say everything was wonderful, but I could say everything was better. Sophia had warmed to her big sister, and seemed to understand that the large, fuzzy man wants her to be happy. There were mornings when she screamed in the old, forlorn way, and days when I felt like I had been beaten to a pulp. But Sophia began to understand that love can come in different flavors, and she began to open her scared little heart to us.