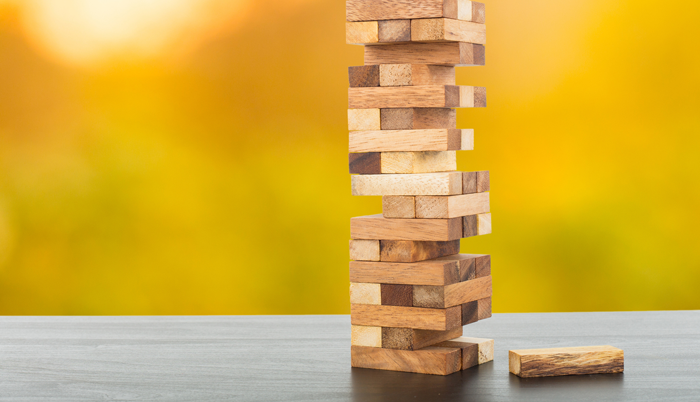 The journey from the moment you first think of adopting from foster care to sending your son or daughter off to college, walking them into their first apartment, or, in my case, seeing one of them head off to the US Air Force boot camp, is anything but a game; yet it is a game that I use to best describe it.

If you’ve never heard of Jenga, let me quickly explain how it’s played. You begin by building a thick, solid tower out of rectangular shaped wooden blocks. The players take turns removing one piece at a time, then placing it on the top of the tower, trying not to cause the entire thing to collapse. We enjoy this game in our family, as it removes any fierce competition and replaces it with a steady hand, some logic, and a little bit of luck. It was one of the first games we played with our children after becoming foster parents—and, I soon realized, an apt metaphor for our lives.

As I raised my biological daughter, Beth, I meticulously laid down piece after piece from the moment I cut the umbilical cord. The years went by and we symbolically built that solid tower that would eventually help her move into her own apartment, walk on my arm down the aisle to say, “I do,” and hand me my first and then second grandchild. That sturdy foundation is what every parent hopes to build for his child. Then, as your child heads off on her own, she removes pieces as she sees fit, to reach higher and move forward, hoping against hope that she won’t fall or collapse. If it does, indeed, all come crashing down, we gather the fallen pieces, rebuild, and continue playing.

While watching our 7 and 13-year-old foster children play Jenga, it dawned on me that we were playing the same game as parents, but needed to “play” in an entirely different way; we needed to play the game backward.

Imagine, if you will, starting with a tower in the center of the table, but, instead of being solid, it’s already filled with holes. The game’s objective now is to carefully fill in the gaps with the missing pieces, not knowing which goes where or how much force you’ll need to put it into place…but yet, you try. It is a bit harder—sometimes a lot harder—and you may have many more collapses than when you play the game the other way, but, trust me, it isn’t impossible. And when that tower starts to fill in and become stronger, it’s an amazing feeling for all playing.

My struggle in this “game” has always been how to assess the pieces that were missing and how to insert them into my kids’ lives. In truth, I think I’ve gotten quite good at this game, playing it both forward and backward, without any “normal” rules, but not without a lot of sweat and tears. To start, you need to see each child as his or her own person. Sometimes, you have to go all the way back to the beginning to find a “missing piece,” regardless of the child’s age or how mature he or she is trying to appear.

Here’s one example: Our daughter, Rosanna, threw wild and outrageous temper tantrums that had proved quite successful for her with other foster families in getting what she wanted. After reading about this in her “telling” and seeing it firsthand, I cast my mind back to Beth’s growing-up-years and simply did things backward. The next time Rosanna wanted something, like chocolate before dinner, and I said “no,” I had a plan. As soon as Rosanna began to scream and stamp her feet, I gently carried her into her room. I told her that she was safe here and that she could scream as long and as loud as she wanted to. Then I stepped out of her room and closed the door. When she screamed, I responded “louder.” She indeed screamed louder, and louder, for a good 20 minutes [the kid has stamina, that’s for sure!], until she fell asleep and silence took over. Forty-five minutes later she walked into the kitchen, hungry as a bear, with not a care in the world.

We all ate, cleared the table, and moved into the living room. But, before we turned on the TV, I told her we needed to go back. Go back to an hour ago, and talk about the tantrum. She wasn’t too happy about this. It took time, but she did learn how to go back and not only recall, but verbalize, how she felt, why she felt that way, and what she really wanted.

At seven years of age, some of this was way beyond her understanding and ability, but I consistently asked the same questions. Sometimes we revisited the same tantrum two or three times over the course of a week or a month. Eventually we would talk about expected behavior and expected outcomes, and about feelings and wants vs. needs. She quickly understood that she could scream as long and as loud as she wanted while in her room, and did it a few more times, but then the novelty wore off and she realized that the results were nothing like she wanted. The tantrums started decreasing in frequency and intensity until they became almost non-existent.

The true issue that I needed to recognize and talk to her about was “disappointment.” It was her underlying demon, if you will. She’s 14 now, and we continue to work on it, but she is thriving and handling disappointment so much better today. It took a long time to accomplish this. We had to go back many times, not just to the incident, but sometimes all the way back to the age when I felt she had first been grievously disappointed.

Rosanna and I had many talks about what we thought she could possibly know and ultimately miss about her birth mother, after having been removed from her at the age of only six months. As an infant, Rosanna would have known her mother’s voice, heartbeat, scent, touch and perhaps even her moods, both good and bad. Then we explored the idea that Rosanna could have missed the way her mother held her, cradled her, rocked her, and possibly even shook or ignored her. These are real possibilities, as she was removed from her mother’s care for definite reasons. We explored all of this as possible reason behind her actions, behind the temper tantrums she’d been throwing since before she could remember. Then we began figuring out how she could put what she was feeling into words. “I feel disappointed that I can’t have chocolate right now.” “I feel angry that my brother ate the last tortilla.” “I am scared to be alone.” “Who will teach me how to cook?”

Once we started walking together in this direction, things began to change. Sometimes you have you let children catch up to their age, but sometimes you have to go back to an earlier emotional age in order to find that missing piece. And I can honestly say that this is one piece has been successfully slipped into place in Rosanna’s increasingly solid tower.

MICHAEL SERRA, an artist and writer, is a father of three (and grandfather of two) who lives with his family in San Diego, California.