I am not sure when I knew I wanted to be a mother.

Perhaps it was that moment in high school when, draped in an apple red, Mysore silk saree, I was pronounced the possessor of child-bearing hips. Or was it as I sat in the crowded room with my girlfriends the night my best friend from college got married? I am not sure. It does not matter, not anymore.

I remember racing to my neighbor’s home, late at night, following her breathless phone call. Her husband sat on the sofa, his hands covering his face. Still sitting on the toilet, she held out her positive pregnancy stick for me to look at. I knew then, without doubt, that this was what I wanted, this breathless excitement, the joyously overwhelmed partner, this exhilaration of discovery.

After months of trying, I was late by a couple of days. In my hyper-awakened state, I imagined clumps of cells merging and growing into my child deep inside me. When my period came, I crumbled, as I did every other month. I sobbed, not just for the child that was not to be, but for me, for the loss of uninhibited expectation.

I often imagined finding out that I was pregnant. I imagined innovative ways in which I would surprise the dad-to-be. I imagined being heavily pregnant, leaning on him for support, walking through the hospital entrance. These daydreams were vivid and full of detail.

I remember sitting in the doctor’s office, looking at the framed degrees and pictures of smiling babies and knowing that our baby would one day be part of that collage. I turned to squeeze my husband’s hand and realized we were on different planets altogether.

I remember the late-night conversations, the nights hunched over the laptop researching assisted reproduction. I remember the stirrups, the kind doctor who made bland jokes even as he inseminated me while my husband watched on. I remember gingerly getting off the table and pushing back the car seat so I could keep my bottom elevated. Most of all I remember the hope. The frenzied, grasping-at-straws hope that filled me.

I remember the day I got the call. Driving on the interstate on my way to work, the phone rang. I pulled over to the shoulder, my fingers trembling as I called back. The nurse was clinical. “Sorry, the test came back negative.” I felt air whoosh out of me. I felt my body sag. I hung up and drove the twenty-odd miles crying—huge gulping cries, wounded animal cries. Then I reached work, plastered on a smile, and went about my day.

A new flame of hope

I remember the phone conversation. I remember the treacherous flame of hope that flared up at the thought. My friend had started her dossier to adopt from India. Over the next months I spent endless nights trawling through forums, organizing folders that burgeoned with information—then coming to the realization that international adoption as an immigrant was next to impossible.

I remember stumbling on a thread on an adoption forum. My fingers trembled as I hit send on an email to someone across the country asking her to share details of her domestic adoption on an immigrant visa. I remember the weeks that followed as it seemed we might actually have a way to adopt within the U.S. The hope that crept up simmered on low, battered by experience and ready to give up.

The first time we were matched, I was in the middle of a local farm, the cell phone reception spotty. “She picked you!” the excited voice whispered in my ear. It was an out-of-body experience. I saw myself celebrate and yet, I was the observer, standing dispassionately by the wall, waiting for me to stumble.

I blogged, I wrote letters to the expectant mom. My stomach lurched as we waited to hear her voice across the static-filled telephone line. Dread crept in when she missed two phone calls. By a month, we were told that the expectant mother was a phantom. She had never existed.

The second time we were matched, my voice was steady and matter-of-fact. As I wrote the second check for birth mother expenses and wrapped up my call with the expectant mom, I realized perhaps this story could have a happy ending. I named the child in my dreams “Bubbles.” I wrote sappy, heartfelt letters to it. I weaved a happy, colorful world from the fiber of my being. I set the child at the center.

By the time snow fell and the Christmas tree was up, I was vicariously living the life of a pregnant woman. My emails were filled with doctor visit updates, expense accounts, and requests for documents. A smile was a permanent fixture on my face.

I remember the moment I saw a message from the social worker, in the silent dusk of the hotel room we’d just checked into. Cryptic and pregnant with implications, it said, “Call me.” I called and listened as she explained why we would not be flying back home with a baby in tow. My husband and I stoically visited the family, wished them well, and turned back and left.

A new year dawned the following day. I resolved to make peace with our barrenness. I cried less. I pounded away on my keyboard. I haggled and got back into my MBA class that I had dropped less than a week before.

I let go. I let go of hope. I let go of dreams. I let go of the images I had held on to for a lifetime. I purged my inbox. I returned baby items we had bought.

As dreams turn to reality

Three weeks later, I remember the phone call. It was 10:45 p.m. I was working on an assignment for my class and my husband was watching a movie. I picked up the receiver tentatively. Calls at that hour usually meant news (mostly bad) from India. The voice sounded familiar. My heart leapt to my mouth when I realized it was the social worker from the town we had been in less than a month before.

I remember the morning. I was showered and dressed, though my nerves were shot. At the hour on the dot, I heard the incoming call request on Skype. Two 10-month-old babies came into view. One crawled holding onto a bottle. The other sat looking curiously around. The conversation was brief. We introduced ourselves as prospective adoptive parents. Brandy introduced herself and her children. We traded questions and answers. Much like the first few meetings between my husband and I, we talked of many things but never about what if we raised her children.

An hour later my husband and I drove to a restaurant, still waiting to hear from the social worker. I remember watching the trees coated with snow fly past the window as we sat in silence. My phone rang as we pulled into the parking lot of the restaurant. “Congratulations!” began the social worker. The buzzing in my ears and head blocked out most of what she was saying.

A week after that call, across the country, we walked down the dimly lit hallway of the hotel where the social worker was waiting with the children, our children. I remember the flash of the camera as the door opened, the hugs and pink balloons. I remember a million details about that night. Most of all I remember happiness filling me up as I floated in that grey zone between dreams and reality.

That’s when I met my daughters.

Read an essay by Brandy, the birth mother of Lakshmi's twins.

<
Previous:
"Letting Go After Months of Struggling to Parent"
Next:
>
"Dear Other Mothers...Thank You"
Sharing
Authors
Lakshmi Iyer 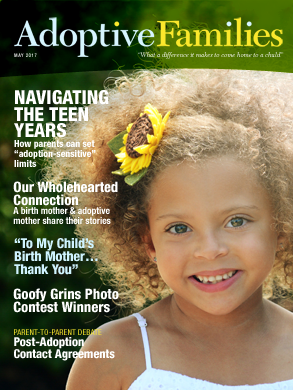 ON THE COVER: Sophie (6, U.S.), daughter of Janice and Emmett, West Virginia. Photograph by Janice.

"Our daughter is the sunshine of our lives. Her personality is full of joy and she lives every moment of her life making everyone else feel that same joy. I took this photo on a warm summer afternoon, picking wildflowers, and I felt that it captured these qualities. Her smile melts my heart each and every time I see it." —Janice