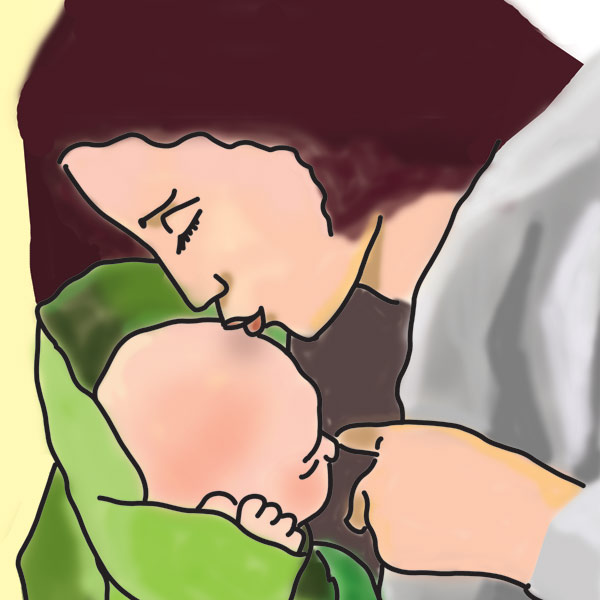 When I was struggling with infertility, I felt alone. All around me, women were celebrating pregnancies and births, welcoming children into their lives, while I knew only heartache and disappointment. I didn’t feel the expectant-mother glow, even after my husband and I made the decision to adopt internationally. There was no growing belly to fawn over, no surprise baby showers, and, because we decided to wait until we had a referral in hand to share the news, no happy updates to share along the way.

Then, after a year of waiting, our son arrived, and I was thrust into motherhood. I could talk about teething, baby food, and sleep strategies with other newly minted moms, and share my own advice, as well. Suddenly, I was part of the experience. Or so I thought.

It wasn’t long before I realized what set me apart from other club members, the division between me and them: labor. I was chatting with two friends, one of whom was pregnant with her second child. When the talk switched from child-rearing to giving birth, I became an outcast. I froze, fumbling with my hands, unable to participate.

Yet, at that moment, I saw that the time leading up to my son’s homecoming was my labor. Although I had not endured physical pain, I experienced the emotions — anxiety, anticipation, confusion, and the flood of joy and awe that washes over a woman in the instant that motherhood begins.

Like most expectant mothers, I spent the days before my labor “nesting.” I put the finishing touches on the nursery, assembled the stroller, and installed the car seat. I packed (and repacked) the diaper bag and made the necessary post-arrival appointments. I practiced yoga and soaked up my last moments of solitude. I tried, unsuccessfully, to sleep.

My “water broke” on a rainy Wednesday morning, in early November, with a call from our social worker. Our son’s flight was arriving earlier than expected. We left the house around lunchtime, and drove seven hours in a downpour. At the airport, we learned that the plane was delayed due to the weather. That left us, for the next several hours, alone with an empty stroller, and left me with a pounding in my chest. My “epidural” was the reassurance of our airport liaison, who listened to me ramble about everything that had led up to that moment.

My “heavy labor” began at 11:37 p.m., when I returned from the arrival board (for the hundredth time), and announced that our son’s plane had landed. I grabbed my things and ran to the gate, ignoring the warning from the liaison that our son and his escort would probably be among the last to get off the plane. The passengers had to walk down a long hallway to reach us, and many of their families and friends had gathered in the waiting area. I leaned against the restraining rope, and swung it mindlessly as I peered around the corner. Is that him? Is that? I asked myself over and over again. It was like waiting for a famous person to step out of a limo.

After an hour or so, the flow of passengers began to dwindle. It was late, and I could barely keep my eyes open. My neck was sore from craning around the corner. I let out a yawn and squeezed my eyes shut. When I opened them, I saw a Korean woman in front of me, wearing a green sling. In it was my son. He looked exactly like his photo, with big, curious eyes and perfectly formed lips. The woman undid the sling and handed him to me.

The escort passed the diaper bag to my husband, like an Olympic torch. He, in turn, presented her with a gift, a token for the service she had provided. “Thank you. Thank you so much,” we gushed.

After our airport liaison and the escort left us, reality came into focus. People were pointing at us and smiling. Exhausted, and a little embarrassed by the attention, I instructed my husband to grab the stroller and bag, and we headed for the parking lot. The last moments happened so quickly that my husband and I had not had much chance to talk about what we were feeling. Before getting in the car, he looked at me and said, “I guess we’re parents now.” Indeed.

From the very first time I held my son, the struggles that I faced all became worthwhile. I still carry the pain of infertility, and I still feel a pang when someone shares the news of her pregnancy. But what matters is that we are sharing our life with a child. My “labor” was untraditional, but it brought me the greatest gift I have ever had.