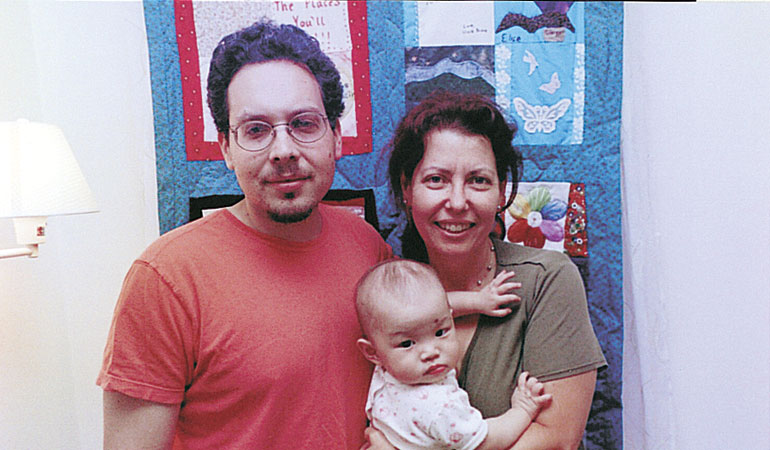 As we began the official wait for our daughter, we jumped into a multitude of activities to prepare ourselves for parenthood. We immersed ourselves in the local adoptive families network and felt grateful for the information and shared experiences.

But I worried about my friends and family. How could we bring them into the anticipation and excitement we felt about building our family through adoption?

Two ideas came together. One was from a few years ago, when my sister-in-law was being married. She included a square of muslin fabric with each wedding invitation. She called it a prayer flag and asked that each attendee fill it with a prayer, blessing, hope, or dream. At the wedding, the flags were tied on a rope that encircled the outdoor party.

Then, a year or so later, I read about a baby quilt that began this way: a grandmother sent fabric squares to family members and asked each person to fill a square and then write a letter to the baby explaining its significance. The quilt became both an heirloom and a family tree.

So I became inspired to create a keepsake quilt for my daughter. I sent out about 50 letters to family and friends, inviting them to contribute a square to welcome our daughter. I also used the letter to inform them about our preparations for adoption.

Although we included white cotton fabric squares with the letters, I gave them the option of using their own fabric as long as the dimensions made a six-inch square, plus a 1/2-inch seam allowance. We also requested letters from family and friends. We suggested that they introduce themselves, discuss their connection to us, and explain their fabric and design. We planned to put all the letters in a scrapbook.

I don’t own a sewing machine and know only one stitch, but I found a beginner quilting class, where I learned the basics.

The Many Colors of Life

A few weeks after the mailing, we received our first square. A friend who is a bilingual first grade teacher in New Mexico used a piece of brilliantly colored tie-dyed fabric made by her students.

She wrote a line from “De Colores,” a song her students love, on the square and included a translation of the song describing a love of the many colors of life. In her letter, she also told how we met and gave her wishes for our daughter. I was delighted, feeling closer to both my friend and my daughter.

The next square to arrive was a fabric collage of the Sierra Mountains, a beloved hiking place of a favorite aunt. A few more squares trickled in, and before I knew it, my quilting class was ending, my practice quilt was finished, and I was ready to start. But I had hardly enough squares to make a four-square block, let alone an entire quilt. I sent a follow-up e-mail, with photos of the squares we’d received as inspiration.

More time passed. I received a finely detailed drawing of a Monopoly board from my first cousin, along with a letter describing our family’s love of playing board games together. Her sister decorated a square using tube paints and glitter on denim. With the next arrival — dainty lace squares from my aunt and uncle — I could begin to sew my first quilt block. It was fun arranging the squares into an eye-catching pattern.

But shortly after that, the trickle of incoming squares slowed to nothing, and the original date for our referral had passed. The quilt became a way for me to stay connected to our dream of having a child. I anticipated telling our daughter the story of the quilt and its squares, feeling the different textures of fabric with her, and looking at the visual feast.

Slowly the squares began to arrive again. After a few more months, we had received 32 squares in all, enough for an 8-block quilt. I began the actual quilting early that month, inviting friends and family to join in and learn how to quilt. More than one remarked that they hadn’t sewn in years and really enjoyed it. With the quilt almost finished, nothing pleased me more than watching other people’s delight in seeing how their squares fit into the whole.

Finally, we got the long-awaited call with our referral. My husband, Jeremy, put aside his work on building a quilt rack, I carefully folded the quilt and put it into the closet, and we got busy making travel arrangements to meet our daughter.

Sylvia came home in the fall. The quilt now hangs in her room, within sight of her crib. It’s easy to take down and spread on the floor for playtime. Someday, she may use it as her blanket. In the future, the scrapbook of letters will interest and inspire her. But for me, the process of making the quilt, just like the process of adoption, has been one of patience, determination, and love.

<
Previous:
How to Prepare for Parenthood
Next:
>
Figuring Out Adoption
Authors
Ellen Kahaner