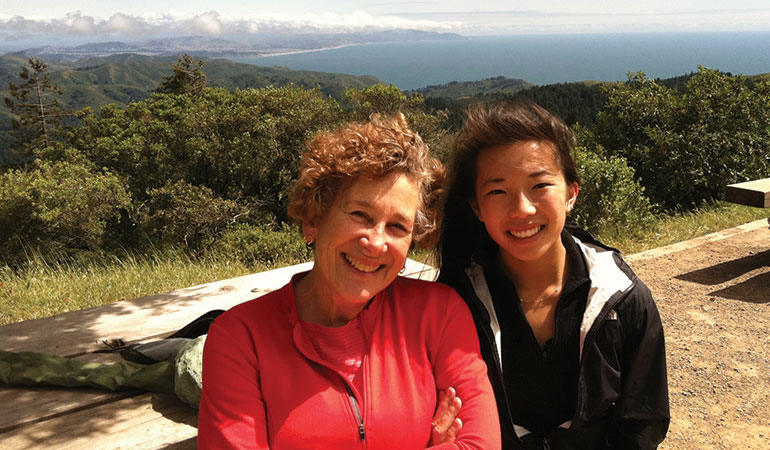 It seems like yesterday… I flew home from China with a skinny baby who couldn’t sleep on the plane, so I walked with her, pacing the aisle, from Guam to Hawaii. Over the next three days I took her to see the pediatrician, attended a Valentine’s party, and went to a huge dog show. Finally, when I realized I wasn’t traveling anymore, exhaustion hit me and I almost didn’t get out of bed.

Yesterday, the real yesterday, I hugged my baby goodbye in the bright mountain sunlight outside her college dorm, in Boulder, Colorado, climbed back into the rental car, and headed for the Denver airport and my empty home, stunned.

Only a few months ago, still caught up in the rush of senior year, I sat in an amphitheatre, with 10,000 other people, watching our 855 sons and daughters graduate from Berkeley High School. There was a sea of colorful robes, with sashes of all stripes, representing Berkeley High’s six learning communities and three ethnic graduation ceremonies. My daughter attended both the Academic Choice Commencement and the Asian Graduation, and she proudly wore a sash bearing the red and gold of the flag of the People’s Republic of China. On top she wore a lei of double-white dendrobium.

So, Here We Are

Does time fly? No, birds fly. Time hurtles past relentlessly like a turbo-charged bottle rocket, powered by the combustion of hormones, questionable clothing choices, peak-decibel rap music, and emotionally laden attachment (mine, not hers). Along the way there are issues: girl issues, adoption issues, human issues, identity, racial, gender, and political issues. And to top it off, most of this is “developmentally appropriate.” Yikes! What’s a mother to do, other than watch as her girl glides away in a sometimes nimble, sometimes wobbly, display of individuation that is, finally, normal.

Normal. That was my dream as I sat in that Civil Affairs office in Changsha, Hunan Province, and first glimpsed her miniscule photo on a dossier. As I waited to go to China, I had chanted to myself for almost a year, “Ten fingers, ten toes,” my own kind of prayer for the well-being of this small stranger who wasn’t even born yet. And already, in a flash, she is a graceful teenager settling into college.

Our family falls within a special slice of the world of international adoption. Our 150,000 children, mostly girls, adopted from China in the last 20 years, are now living in countries from the United States to Sweden to Spain. The girls constitute the greatest cross-cultural migration based on gender in history. They were the Aha! moment for those of us who wanted children but couldn’t seem to get them by climbing under the covers like everyone else. They made us who we are today, because they made us parents, but they came with a bonus.

As part of our adventure in multiculturalism, we parents have had to learn to value and accept each other’s differences. Many of us — Jews and Mormons, Buddhists and evangelicals, conservatives and liberals, career military and professors, CEOs and schoolteachers — have absolutely nothing in common except the thing we treasure most in this world, our precious children. They have helped us, sometimes forced us, to embrace diversity, to see a larger world. These children — with their specialness and their normalcy, their brilliance and their struggles, their confidence and their anxiety — made us really look at each other. Every day, I think we are the luckiest people in the world. Everyone may not love having their eyes and hearts pried open, but it was fine with me.

I look at my daughter, this sweet soul, and the miracle of how we came to be together never ceases to floor me. I think of the day she finally walked, at 14 months. She ran the next day and never fell down. I remember her teacher telling me that, when the kids chose an animal they’d like to be, she chose a deer, “Because they don’t have bad dreams,” and how she finally slept in her own bed…in first grade. I remember when she learned to ski, and within two hours, was going up the mountain on a chair lift with our friend, while I stayed down on the bunny slope with his son. I remember how she struggled to learn to read, and when I asked her if the letters were floating around on the page, she said, “Well, duh.” I remember her tiny body hurtling through space, in some kind of aerodynamic phenomenon, and landing squarely on a gymnastics mat, taking second place at States. I remember the few times she was really bad, which I won’t discuss.

And I see her now, one foot out the door, with her heart still struggling to pull free from all that is familiar and comforting and solid. I am still the mom; I’m not stepping down, just stepping aside and trying to watch things hum along under new management.

We started our life together on a plane and, suddenly, I am airborne again, only this time I’m flying solo. That first flight across the Pacific was exhausting. But this empty nest, this new normal, has a different kind of weariness. It is filled with silence, and immediately starts to get old.

The dogs keep watch outside my daughter’s bedroom door. I manage not to lie down with them there in a heap. I can only wish myself, and every other parent of a college student, the best as we get used to our children’s growth and separation. I marvel as they take wing and become…what? Become themselves, the captains of their own ships. It is a marvelous thing, self-individuation. Now if only I could get this knot out of my chest….

An unhappy freshman year, with fellow students asking if she was a foreign exchange student, prompted my daughter to transfer to a university in California. She is much happier. I, too, am doing better, filling the silence. Resilience cannot be overrated.

<
Previous:
Ask AF: Feeling Left Out of a Birth Family
Next:
>
Birth Parents on Their Minds
Authors
Peggy Lee Scott