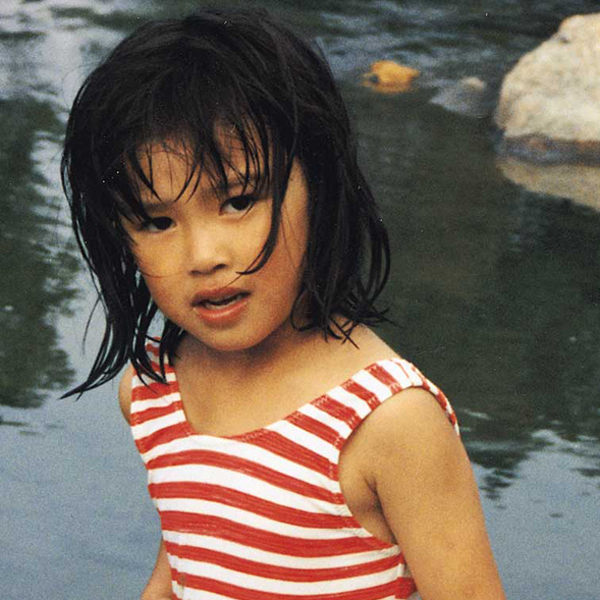 My daughter and I stand at the bathroom mirror to brush our teeth. Her skin is smooth, and she has a freckle on her right temple. When she smiles, she has two dimples, not on her cheeks, but beneath the corners of her mouth.

From above, the curve of her eyelid reminds me of a swallow, skimming on the wind. Sometimes I want to cry when I look at her, she is so beautiful.

Above her face I see my own.

Short, unkempt brown hair and brown eyes, deep-set behind strong glasses. I’ve never thought I was pretty, but at age 52, I don’t mind. My daughter and I look very different. I don’t mind this, either.

My daughter PanPan is Chinese, brought to me through an international adoption. She was abandoned somewhere near the coastal city of Ningbo and taken to the Children’s Welfare Center when she was a few weeks old. She was about five months old when I adopted her.

This is all I know for sure about her beginnings.

Over the years we have fielded many questions from strangers. We live in Vermont, and as an interracial family, we stand out. Some of the questions are ridiculous — ”Does she speak English?” I was once asked when my daughter was seven months old.

Some are thoughtless and rude — ”Where did you get her?” a veterinarian asked when I took our dog for a rabies shot (I never went to him again). Most people ask where she was born, how old she was when I adopted her, who her birth parents are. To most questions I can truthfully say, “I don’t know.” But the questions never go away.

The most difficult encounter, however, was with a little girl who looked a lot like PanPan. Two summers ago, my daughter and I visited a beach along the river near our home. PanPan was splashing in the shallow water a few feet from the shore.

When I spotted another Asian girl, I looked around for the parents, thinking that maybe I’d found another family like our own. Instead, I saw a white father and a dark-skinned woman, perhaps from the Philippines. The girl looked more like her mother than her father, and nothing like anyone else on the beach. Except my daughter.

The girl stared at PanPan and then at me. She drew closer, her stare needy and intense. Probably she had been stared at in just this way.

“Are you her mother?” she asked me, her voice filled with skepticism.

“Where is her real mother?” she insisted.

I knew perfectly well what she meant. “I’m her real mother,” I said. I looked over at PanPan, standing apart in the water, a few feet away. She had stopped splashing. A little girl with features like her own wanted to know if I was her real mother. I waded over to stand by her side. “Here I am,” I said.

“But,” the little girl continued in some confusion, “she looks Chinese.”

“We’re a Chinese-American adoptive family,” I said, loading all the information in one short sentence. “Soon we’ll be celebrating our family day,” I said, cheerily. “We’ll have a big cake.”

“Where is her father?” This child was relentless. I sidestepped, and said something positive about single-parent households.

“Why did you adopt her?” the girl persisted. The answer is simple. I wanted a child. But I don’t know why the names Shen PanPan and Eliza Thomas came up together. I put my arm around my daughter’s shoulder. “We were always meant to be a family,” I told the little girl. I looked down at PanPan. “I waited for a long, long time for you,” I said to her.

“Me, too,” PanPan said. She’s heard the story a million times, me waiting in Vermont, the tiny referral photo, her waiting in China, our trip home. Her favorite part is how the woman from New York threw up on the plane.

The girl’s mother called out to her daughter. “Anna, stop bothering those people.” Anna backed away slowly. PanPan and I decided to make a castle. I thought we were safe, and for a while we were.

We made a tower. We dug a tunnel and laughed when our hands met. PanPan, who is more fastidious about such things, went to the water’s edge to rinse the sand off. I bent over to dig a moat, and when I looked up, Anna was back. Inescapable. Her parents, towels and beach paraphernalia in hand, called to their daughter.

“Anna, we’re going now,” they kept saying. But she just stood there. PanPan returned. Then Anna asked her final question. “Why did her mother give her away?”

I have tried to imagine the event. A woman carries a bundle in the early morning hours. She hurries down the street to the train station or the police station; she must leave her child somewhere she will be found. This is China, 1994, the one-child policy is firmly in place, complete with fines and sanctions. The economic and social pressures to have a healthy boy are ancient and extreme. This baby is too great a burden. This baby is a girl.

She lays her bundle gently down. Maybe the baby cries. Maybe the woman does too.

“Too many questions,” I said.

I turned my back on Anna, and picked up my daughter. She buried her head in the crook of my shoulder. I saw Anna’s parents pulling her away across the beach.

“That was a lot of questions, wasn’t it?” I whispered. She nodded into my shoulder. “We can talk about them any time you like,” I said. She nodded again.

Later, in the back seat of the car on the way to get ice cream, PanPan said calmly, “What about our talk?” This was the first time someone had said PanPan’s mother had given her away. Although it came out of the blue on a sunny afternoon, this sorrow will reappear, at odd moments, as implacable as Anna. I know our talk was only the beginning of a long conversation.

I told PanPan we would never know her birth mom, but that I was sure that she loved her. I told her that her birth mother made sure she would be safe while she waited for me. I told her we could only try to imagine her birth father.

“Actually, I think I do know something about your birth mother,” I added. “She must have been smart and stubborn and funny and beautiful.”

“Because that is the way you are.”

“Why would we be exactly the same?” she asked reasonably.

This is a good question. Maybe she got her crossed toes and wacky sense of humor from her birth father. I imagine her birth mother has beautiful eyes and a determined nature, but maybe I just imagine it. Maybe my daughter is stubborn and smart and funny simply because that is the way she is. Maybe we are just lucky that we find the same things funny, or maybe this is something we’ve developed together over time.

When PanPan wants to explain something, which is often, she uses her hands, palms up, presenting her ideas as if on a platter. This isn’t a gesture she has learned from me. I’m sure it is as genetic as her lovely crossed toes. Lately I find myself making the same gesture. I’ve picked it up from her. I read articles on nature vs. nurture, but on some level I simply don’t care. We are a family.

I have a Xerox of a tattered note with her birth date and name on it, but I’m not sure whether her birth parents or the caretakers at the orphanage filled in the information. The interpreter in China told me that the word “PanPan” means “anticipation.” He suggested that perhaps the name had been chosen in anticipation of a boy. Better luck next time, something like that. But then, on our way home, the Chinese immigration officer who issued PanPan’s visa smiled at me. “Your daughter’s name is beautiful,” she said. “It means ‘hope.”

Now PanPan is six and in first grade. Her current concerns are spelling tests and math problems. She has a new cat. She says she will adopt a child when she grows up.

I told her that I was going to write this essay. I asked her about the conversation on the beach, if she remembered any of the questions. “Sure,” she said. “The little girl asked why you adopted me.” Practical as ever, she asked, “Why are you going to write about that?”

I was glad that this was the question she remembered. The reasons why I adopted PanPan are filled with hope and happiness. But she will wonder again why her first mother left her, and we will have to put the pieces of that together.

When PanPan was three, I got her a toy telephone. She’d sit on the kitchen floor and pretend to dial everyone she could think of. Sometimes she’d call China. “Hello, this is PanPan,” she’d say into the phone. “How was your day?” she would ask politely. After an appropriate pause, she would say, “We are fine, thank you.”

I’d like to believe that PanPan’s reply could, by magic, bounce over the Pacific and find the person longing to hear that answer.

We are fine. Thank you.

<
Previous:
Birth Fathers: The Forgotten Half of the Story
Next:
>
"In the Company of Heroes"
Authors
Eliza Thomas