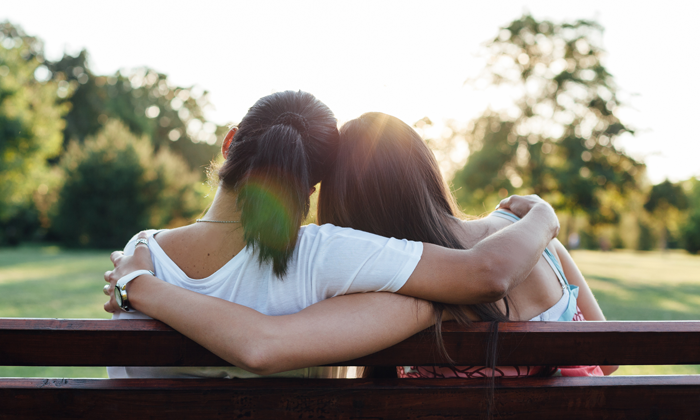 The purpose of setting limits is to help adopted teens to make informed decisions and to keep them safe. We’re not trying to control them; we’re just trying to pave their way. Effective limits convey your values and expectations while holding them responsible for their choices.

At its core, this is about embracing your role as an authority in your teen’s life. What do you expect of them and why? How have you communicated those expectations? And how do you hold them accountable?

Setting limits and expectations is also very much intertwined with adoption. For example, in the absence of effective limit-setting, your teen may ultimately feel more abandoned, not less.

Finding Your Balance as a Parent

In my experience, however, many adoptive parents equate saying no with deprivation. It’s natural to want to compensate for deprivation that someone has experienced. If a person was starving for extended periods of time, why wouldn’t you want to give them a feast?

Many others I’ve worked with find themselves trying to avoid the daunting task of setting limits by attempting to collaborate or negotiate with their teen instead of being the authority. Sometimes parents have become so emotionally worn that they simply don’t have it in them to say no. Most want to do right by their teen but are confused about how or where to begin. And some parents just don’t find it necessary to include guidelines or structure.

Of course, some adoptive parents are the opposite. They are so authoritative and restrictive that their teen barely has a life. This is also problematic. When a teen feels like they have no voice in the family, they feel trapped, and their survival instinct kicks in. They begin to strategize how to get out of the situation by becoming more self-sufficient. In this situation, adoptive parents find themselves at risk for being “abandoned” by them.

So, how do you set and uphold limits while keeping adoption in mind?

1. Keep rules simple and straightforward. I worked with one family that had drawn up a detailed behavior contract—“If he gets a C or higher, he’s in the clear. If he gets a C– or a D+ he’s grounded for three days. If he gets a D–, four days” and so on. First, if you need a contract to keep everything straight, then it’s too complicated. For example, the teen could be grounded with no phone for one week if he fails a class, nothing more. Keeping things simple also lessens the chance of excessive arguments and debates about the details. Sometimes parents realize that that’s the only thing they talk about with their teen, and you don’t want it to dominate your relationship.

2. Shorter, time-limited consequences are more effective. With shorter groundings and other restrictions, it’s easier for your teen then to connect it with the original reason for the consequence in the first place. It also gives you more leverage because when the next situation happens, you’ll have something to take away. Piling on groundings just dilutes the point. Remember, our goal is not for them to make no mistakes; it’s to help them to make informed decisions. If the consequences are quicker, they’ll potentially be able to make a different choice.

Shorter consequences are like spraying your cat when he jumps up on the counter. You don’t need to soak him. He gets the message that what he’s doing is unacceptable.

3. Never get in the mud with them. One of the hardest parts of setting limits is that it can become physically aggressive. I’ve heard so many stories of adoptive parents in a tug of war over a phone or barring the door when their teen threatens to leave, or even standing in front of the car if their teen tries to take it without permission. These scenarios downgrade your status even if you do get or stop whatever it is that you’re trying to do.

One of the most important ways to sidestep physical confrontations is to state expectations and consequences ahead of time. That way you remove that shock which can lead to an instinctual fight reaction. Also, it’s helpful to have another plan in place. For example, if your teen refuses to give you the phone, then you’ll cut off their phone from your phone company until they give it up, which is when their consequences will begin.

4. If possible, use consequences for behaviors that can be proved. For example, adoptive parents will often say to me, “I don’t care what grades she gets as long as she puts her best effort in, and she’s not doing that!” Murky areas like whether or not your teen did her best effort are dangerous territory and frequently lead to arguments and hurt feelings. Grades are just more concrete and don’t leave as much room for interpretation.

5. Don’t ask them how or why. Sometimes parents will ask their teen, “How could you do this?” or “What were you thinking?” then proceed to tell them why what they did was faulty judgment. You may not realize that it comes across as critical, but it might. When you say something like, “Do you know what could have happened?” the emotionally vulnerable adoptee may interpret it to feel that you’re calling them stupid. Even if in your estimation it was foolhardy, it will not help to convey that to your teen. Consequences can replace lectures and questions. Anger alone is not an intervention.

6. Anger has its place. When your teen says or does something that doesn’t warrant consequences but that you feel is offensive or entitled or hurtful, anger can be effective in emphasizing your point. For example, if your teen said, “I couldn’t care less what you think,” you could absolutely say, “That really makes me angry! I don’t deserve to be spoken to this way.”

7. Keep love out of it. Often, parents will tell me that when they give consequences, they’ll also say, “I love you.” This may seem counterintuitive but it’s really best to keep love out of it, verbally, I mean. When you tell them that you love them, it actually can make them feel more humiliated. When I worked at a “camp” for emotionally disturbed kids, my group was the 13-year-old boys. When one of the boys was upset and a staff person approached them, they would usually say something like, “Get away from me,” along with some profanity. It’s humiliating to be “mothered” when you’re already feeling vulnerable. Plus, when you tell them that you love them, they get the message that you are uncomfortable with your anger and theirs.

8. Strive for consistency. Being consistent in what you expect and how you hold them accountable gives you credibility and helps to establish new behaviors and habits. For example, if you’ve decided that curfew is important to you to be followed, you need to respond the same way, every time. Smaller lasting changes are better than dramatic changes that aren’t realistic. It’s best to focus in on one or two limits at a time.

9. Talking about adoption and setting limits doesn’t mix. Sometimes you’ll be setting a limit of some kind and your teen will say something that sounds like adoption, such as “I knew you didn’t trust me” or “Why don’t you just kick me out? Everyone else had.” It might be tempting to engage in an in-depth conversation about those issues, but I’d advise against it. For example, you might say, “Yes, that’s what you’re feeling, but I’d like to make sure we’re clear on your grounding,” or whatever limit you’re setting at the time. When you convey this, you’re sending two messages: “Don’t use your adoption to justify or deflect from responsibility” and “It’s such an important topic that it deserves its very own conversation, not to be thrown in at the last minute.”

10. Be savvy, not sneaky. Sometimes parents think that their teen is up to something but can’t put their finger on exactly what it is. Or they know but they can’t prove it. In my experience you should trust your intuition because it’s usually correct. When you don’t address it, your teen may perceive you as clueless and will respect you less. But you could bring it up in a respectful but direct way, by saying something like, “I think you’ve been taking money out of my wallet. I can’t prove it, but that’s what I believe.” Or, “It just seems like there’s something you’re not telling me. I don’t’ know for sure, but if there is something, you need to tell me right now.” When they deny it, which they probably will, you could just say, “I could be wrong.” Knowing that you’re onto them may result in a change in their behavior.

Being savvy is different from being sneaky, though. Parents tell me that they monitor their teen’s texts or Facebook profile or secretly search their room. Or parents ask their teen something to catch them in a lie. “I just wanted to see whether he would tell me,” they’ll say. But sneakiness is faulty role modeling. Your teen respects you less because you’re not being above board. Like you, they can also tell when you’re up to something. Being more upfront will prioritize integrity. For example, you could just tell them that their bedroom is fair game and will be searched periodically, or that there will be random checks of their cell phones to make sure everything is appropriate and within guidelines. Your teen may not love it, but they will appreciate it.

Remember, respect precedes love and belonging. After respect comes trust. I’m not saying that every adopted teen needs extensive limits and consequences. That’s not always the answer. But rules and guidelines are part of life. If they don’t respect you, they may have difficulty respecting authority in general. Know that, with any changes, sometimes things can get worse before they get better. Change can cause some upheaval, but that’s the key to moving forward. 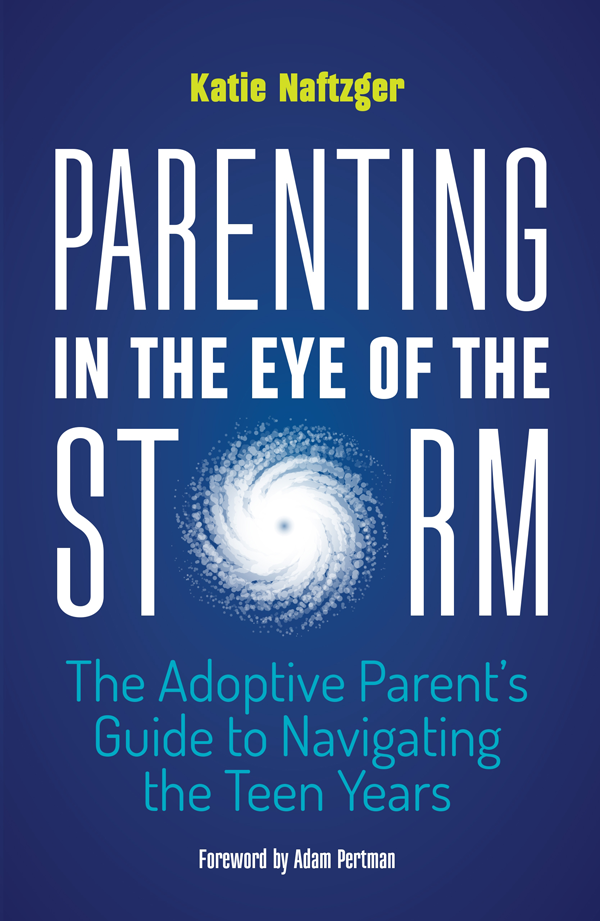