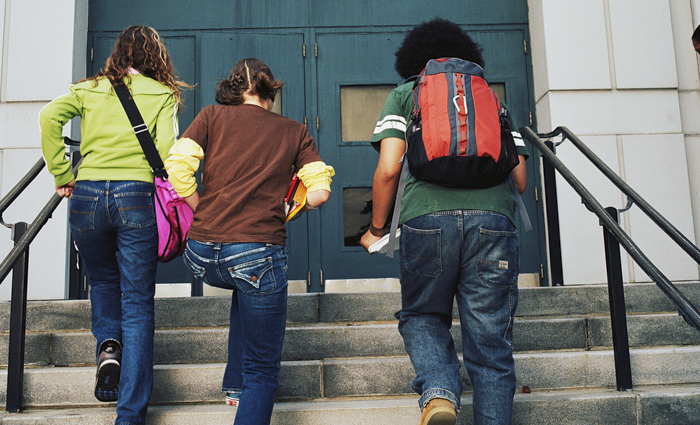 Although we’re just over halfway through the academic year, a lot of parents with school-aged children are already obsessing about the fall: Is my child happy and thriving, or do we need to make a change come September? If you’ve got a kid on the threshold of a big transition, like the start of kindergarten or high school, you’re probably sweating that decision even more, because who doesn’t want to get the school choice right the first time and save all that heartache down the line?

As a mom, I confess I’m a perpetual second guesser, especially when it comes to education. My husband and I are raising a daughter adopted from India and a son adopted from Ethiopia, both high school freshmen, and an Ethiopian daughter who’s in the eighth grade. All three kids attend a private school serving grades six through twelve with challenging academics, a robust arts program, as well as a commitment to social justice and environmental sustainability—but the truth is, no school is perfect. As I wrote in an essay for The New York Times last year, the fact that my kids are racial minorities on their campus is far from ideal. Like other kids of color who move in majority-white spaces, mine are often featured in the school’s marketing materials to illustrate the institution’s commitment to diversity. Seeing my kids publicly recognized for their accomplishments feels good. Having them singled out strictly based on appearance is a source of tension for me, even when my kids don’t seem to mind.

Some smart readers of my Times piece expressed dismay that I’ve put my kids into a majority-white school. That reaction is understandable, given that I didn’t really have space in a short essay to put our school choice into the context of our family’s life as a whole. All children need racial mirrors, particularly transracial adoptees, who don’t benefit from same-race mirrors at home. Our family lives in a racially and economically diverse neighborhood, so my kids see people who look like them at the grocery, in the park, or at the library every single day. We’re also lucky to have Black and Indian relatives in our extended family, and we make an effort to seek out doctors, dentists, and other professionals of color, not to mention friends. All of these factors help to balance our school decision. School choice is significant, but it’s just one piece of the diversity puzzle.

Still, as someone who grew up attending public schools myself, I never expected to choose private as a parent. When we lived in California, our kids attended a good public elementary school where about 25 percent of students were not white—but very few were Black or Indian like them. Three years ago, we relocated to our diverse neighborhood in Seattle, but a lot of factors made us uneasy about the city’s public schools, including a federal probe into the district’s possible unfair treatment of Black students. We found a private school instead, the one they now attend, where about 25 percent of the students are of color, but few are Black or Indian—just like in California. Finding a single school that offers a critical mass of both Black and Indian students has proven impossible for our family thus far, despite the do-over opportunity our move to a different state provided.

The bottom line is that, like a lot of families, we’ve tried to enroll our kids in the most diverse schools we could find that also promised to meet their academic needs. So far that has worked out, but when my youngest daughter expressed some interest in making a change for secondary school, we visited the public high school in our neighborhood. If my daughter were to enroll there, her face might never be featured in a brochure, because on a campus where 93 percent of the attendees are students of color, she would blend right in. It’s also a school where 64 percent of kids are eligible for reduced or free lunch, and, as a result, teachers and administrators have worked hard to foster a culture of opportunity for all.

At the open house, the principal shared a moving message of equity and inclusion as the school’s secret to success. I came away impressed by the fact that Advanced Placement classes are open to everyone, and charmed by the two happy and polite senior boys who led us around on the campus tour. In short, I loved the campus vibe, as did my daughter. At a time when the public climate has become markedly more hostile toward people of color, I could tell the school would be a safe, supportive space that might be very empowering for her—and I felt regret for not bringing my older two to tour the campus before they entered freshman year.

In the end, my youngest informed my husband and me that she wants to follow her big brother and sister into ninth grade at her current school. Educational decisions are too big for kids to make alone, but at 13, it seems right that my daughter should have a significant say in her high school choice, and I was prepared for her to go either way. I trust her decision to remain at her current school, but I told her that, if either of us starts second-guessing that choice in earnest, I would feel good about her attending classes at our neighborhood public school. She agreed. I’m going to try to stop worrying for now. Sometimes the right choice, or even the better choice, is unclear. Only time will tell.