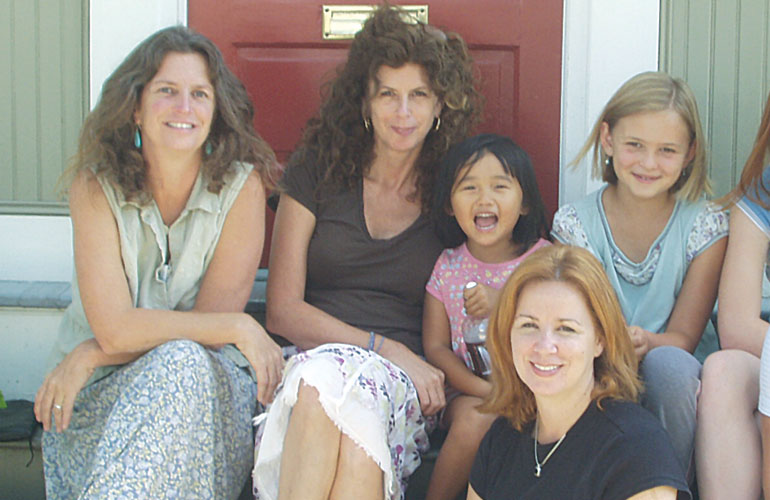 Many years ago, I moved into a railroad apartment in New York City’s West Village: Five flights up, it was a long, narrow space that my sisters, who live in houses, might call a hall.

When the apartment was swept and uncluttered, tulips standing on the table, it looked like a sliver of a country house. As long as you didn’t move. “This place is so peaceful,” friends would say, “so serene.”

And it was — unless the neighbors were home. I nodded to them on the stairs, but I had no desire to know the people across from me: two adults and one young daughter, living in a space too small for even one person.

I’d come to New York to escape the white, affluent suburbs, to live with different kinds of people, but this was just too close. Their language, their cooking, their shouting — everything they did seemed foreign and loud. I closed the door; they came through the wall. The man’s snoring woke me.

“Stephanie!” I heard the mother call to her daughter so many times it was a song stuck in my head. When the family’s friends came over, their conversation and laughter drove me from my desk, forcing me to walk the streets. Then the worst thing happened.

They had another baby.

And that child cried for 12 to 16 hours, day and night. I banged on their door. I called the landlord. Who were these people? Why wouldn’t they move? At that time, I was trying to conceive a child with the man I loved.

Inches from my neighbor’s snoring, we would be having the industrious sex that people who are paying for rounds of fertility drugs have — and then the baby would start crying. And crying.

“Come on, honey,” he’d say, “we have a job to do.” But by then I’d be sobbing, too, curled up in a fetal position under the sheets, my hands over my ears as the baby screamed.

A Child of My Own

Then we broke up, and I was single again. As the baby next door grew to be a toddler (“Sabrina!” the mother endlessly called), I began the process of adopting from China. Finally, I received the photograph of my future daughter, a sturdy, sad-looking 3-year-old named Yi-Nan, and it was time to go to get her.

Three weeks in three Chinese cities (bicycles, smog, scorpions, SARS, an appendicitis attack), Yi-Nan sobbing throughout the 15-hour flight home, and we were back in New York, slumped in a cab speeding through the rainy night.

As I lugged my new daughter up my building’s five flights of stairs, I began to hear voices, and then I saw them: Stephanie and Sabrina; their mother, Maria; and their father, the snoring man, Carlos. Everyone had crowded into the stairwell to greet the little girl who pressed against my shoulder.

It wasn’t until the next morning that I saw the blown-up color photographs of Yi-Nan — I had no idea who had gotten them or how — pasted on the walls and doors with WELCOME HOME crayoned beneath them.

I hardly noticed, in the blur of those first weeks, how the presence of my next-door neighbors began to comfort me. Maria and Stephanie would coax Yi-Nan (whose name had morphed into Inan) up the stairs as I staggered behind. Then gifts began to appear: a child’s baseball hat hanging on my doorknob; three laundered dresses, neatly folded; a large Tupperware container of plastic action figures.

I was a 52-year-old working woman, living alone with a disoriented 3-year-old who spoke only Mandarin. I was barely coping. Although my friends cheered me on, they didn’t live with me; my neighbors did. One day, Stephanie stood in my doorway as I put away groceries. Another day, both Stephanie and Sabrina came in. Soon they were stopping in regularly to teach Inan numbers and letters and who Barbie is. When I struggled to get my stomping, crying daughter dressed, they materialized, snapping their fingers and singing “You can do it” as they danced around. They charmed her, they calmed her; they made her laugh and helped her learn English. And they taught me to have fun.

Not only our next-door neighbors but the whole building rallied to my support. Our landlords threw a baby shower. Will and Peter, who lived below us, carried up groceries, and very often Inan as well. Soon doors were opening each morning, like little windows in an Advent calendar, as our neighbors called out “good morning” to the little girl counting “one, two, three” as she walked downstairs.

I don’t remember when Maria and I began keeping the doors between our apartments open. I crossed into her kitchen one evening to see Inan sitting with the kids and eating spaghetti. “It’s okay?” Maria said. “Yes,” I said, “if it’s okay with you.” Inan looked up, smiling, her mouth smeared with sauce.

When I was sick, Maria took my daughter next door and fed her. When Inan was sick, Will took time off from work to baby-sit. And when Inan’s fever reached 105, Maria showed me how to wrap her in cold towels. Back from the doctor, we found coloring books waiting for her.

Our doors were open almost all the time now. The children ran back and forth, and Maria and I walked into each other’s homes with only a knock on the woodwork. Stephanie, Sabrina, and Inan decorated the little Christmas tree we’d carted home in the stroller (Peter carried it up). And on Christmas Day, after Inan had been in New York nine months, we opened presents as a group. Will and Peter brought us a breakfast of eggs and ham and blueberry muffins. It was the happiest Christmas of my life.

Children bring blessings, an old friend, a mother, once told me: Children open doors. Inan and I had come all the way from China to find the people who would make our new life possible: our generous neighbors, who had been there all along.