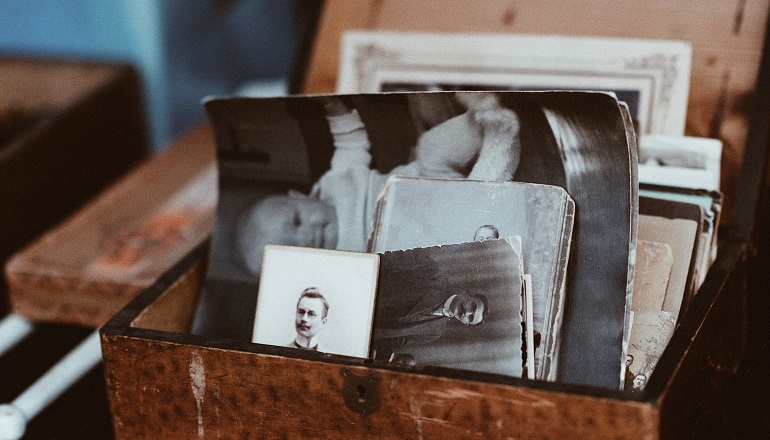 One afternoon a few years ago, I was performing serial readings of The Wheels on the Bus with my younger son, Jesse, then two. Somewhere between “swish swish swish” and “waa waa waa,” something about his expression compelled me to take him off my lap, go to a closet, and pull out an old family album. I flipped to a photo of myself opening Christmas presents at age two, pointed to it, and exclaimed, “You look like me! You really look like me!” Unimpressed, Jesse gave me a look that said, “That’s nice, Ma. Just read the book!”

I didn’t expect him to understand—he was still wrapping his brain around the concept of talking, after all—but it was the first time I’d said it aloud.

Most parents accept family resemblances as a matter of course, but, unlike most people, I’ve never seen my biological parents. I was adopted when I was a month old. I always knew my status growing up—adopted was simply something I was, like shy or athletic—but there were times I felt I didn’t fit in. I remember watching my parents’ friends with their newborns, how family members divvied up the baby’s features: Mommy’s hair! Aunt Flo’s nose! Grandpa’s bald spot! I thought how ridiculous the game was, maybe because I knew no one had ever played it with me. And deep down I thought that it does matter, that family resemblance is the marker of connectedness; it grounds you in your own history.

I didn’t know whose eyes or nose I had. I was alone, without a context. So I became obsessed with what I didn’t have. At friends’ houses I studied family photos on the walls, tracing common features from kids to parents to grandparents, like a game of connect-the-dots played backward. If, for instance, I knew that two people in a crowded room were siblings, I could pick them out, no matter how subtle the resemblance: the cock of an eyebrow, a way of standing. I studied families I knew and families I didn’t, as if they could solve the mystery of my own identity.

Eventually, I outgrew my obsession: Being adopted came up only when I had to fill out a medical history at the doctor’s office (checking off inherited health risks isn’t possible if your family tree’s been knocked down by lightning). After my first son, Eli, was born, my mother-in-law remarked how it seemed only fair that he had my blond hair and blue eyes. I was more concerned with drool, diapers, and latching-on problems. The resemblance struck me only as a nice coincidence. I’d lived a long time without resembling anyone and wasn’t practiced in observing it in myself.

Other people, however, weren’t so blasé. “Oh, now I see where he gets it,” said Eli’s preschool teacher the first time I, rather than my husband, David, who has dark-brown hair and hazel eyes, dropped him off at preschool. After this happened enough times and with enough different people, it began to sink in: They understand Eli within the context of me. I wasn’t adopted anymore. I was a mother.

A few years later, when Jesse was born, it became more apparent. If Eli had my coloring, Jesse was practically my clone. From flaxen hair to blue saucer eyes, his little face was eerily identical to mine when I was a child.

My husband’s relatives noticed: “Neither of them looks like David at all.” Or “Jesse looks just like you. He is you!” I’d reply, “I know, isn’t it great?” I imagine all parents take joy in seeing themselves in their children, but mine was the joy of a cosmic injustice rectified. Not only did I feel the thrill of knowing that my DNA had won out, but I also felt as if I was no longer an isolated incident.

Of course, our genetic destinies trail us like lost puppies. There are parts of my sons I can’t place: Jesse’s nose, for instance—pert, with a sculpted tip. It is nothing like David’s or mine. We scanned David’s parents’ features, his relatives’, family photos: no match. I realized that, just as David’s father’s chin had leapfrogged a generation to Eli, so Jesse’s nose could be a souvenir from one of my parents. My birth parents.

This notion was trippy, to say the least, and I started to scrutinize my sons obsessively for more signs of their Lost Grandparents. I didn’t have to wait long: By the time Eli turned five, he looked less like me—or anyone else I know, for that matter—and more like someone I’ve never met. There was a scrunchy, mischievous look around the eyes and, to top it off, big, bushy eyebrows. When we first noticed them, David said, “Those aren’t mine,” perhaps the first time on record he’s disavowed any resemblance to either of our children. So then, whose are they?

All parents are closet narcissists, looking for reflections of themselves in their children’s faces. I look too, but for glimpses of a family I’ll never know. In a way, it’s like hunting for ghosts, which is probably why I’ve let that obsession go: Ghosts can be frustratingly elusive. And when all is said and done, that my children simply are is enough for me.

The other night I lay next to Eli as he fell asleep, his features going smooth and peaceful. I found that I loved the fact that he looked like no one in particular. No one, that is, but himself.

This article first appeared in Parenting Magazine and is reprinted here with permission.

<
Previous:
Choosing Your Pediatrician
Next:
>
When One Parent Is Rejected
Authors
Dana White