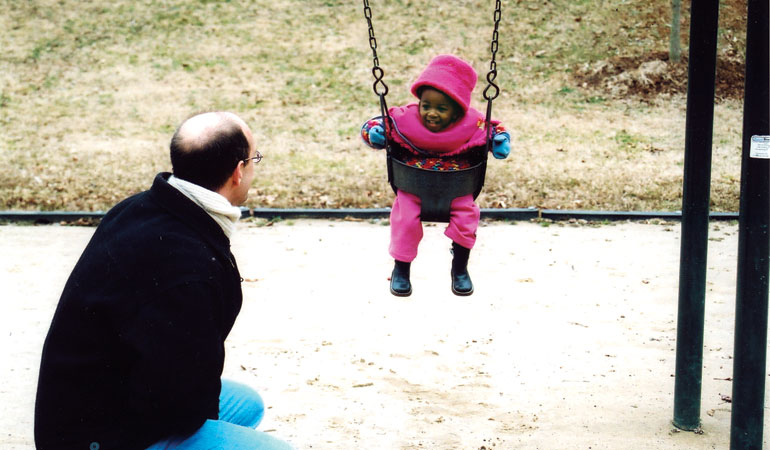 I stand in the doorway with the baby in my arms and watch as my wife, Danielle, backs out of the drive. Because I haven’t started teaching yet, I will look after Noelle, our newly adopted daughter, until the semester starts, then Danielle will take maternity leave.

I give a reassuring wave and smile, and Danielle knows that it’s a façade. I’m terrified. She smiles bravely in return, and I know that she’s actually miserable. She waited years for this child, and now, after spending fewer than 24 hours with her, she has to leave. I suspect that she’s also thinking, “What does he know about taking care of a baby?”

I have done some reading, some shopping, and some goofing around with my stuffed animal, Mr. Fish, but I recall holding a baby only twice.

When my niece was born in 1990, my brother handed her to me long enough to take a photo. The second time was at a family wedding. I was handed the baby of Danielle’s cousin, and people began pointing, whispering, nodding, and smiling. Several women sprinted for their cameras. In short, my experiences with infants have been photo ops.

I was a little surprised that Danielle and I made it through the adoption process without being given some kind of skills test. At the agency, I half-expected to be put into a “parent simulator,” in which I would do my best to feed, dress, and calm a crying virtual baby. At the very least, I expected an exam with questions like:

If the baby begins to swell, you should:

Instead, the agency staff congratulated us and pretended not to doubt our competence.

Actually, there was one small test. After introducing us to Noelle, the social worker said, “The baby needs to be changed.” Danielle was still so freaked by Noelle’s tiny size that the task fell to me. Luckily, I had diapered Mr. Fish several times to familiarize myself with the mechanics.

In fact, I had become quite adept at getting a Huggies around his tail fin. Although I knew that the human species would be different, I had built up some confidence. I smoothly removed the soiled diaper, swiped the butt “down and away,” and positioned the new diaper. I sensed that everyone in the room was impressed.

I resisted the urge to showboat. As I finished the maneuver, one tag didn’t quite align, so I gave it a tug. This didn’t fix it, so I gave a stronger one. The tag ripped off in my hand.

“Hmmm, that’s not supposed to happen,” the social worker said. She gave me another diaper, which, in my nervousness, I put on backwards. This meant that I couldn’t find the tags at all. As I was about to insist, “These diapers are defective,” I realized my mistake. I readjusted it and muttered, “Get used to it, Noelle.”

Now, despite my anxieties, the first morning goes smoothly. The baby sleeps for an hour or two, wakes up, eats, then falls asleep again. It’s not a rigorous cycle. It somewhat reminds me of my time in college. I become so confident that, at lunch, I finally put down the phone I’ve been carrying all morning. There will be no emergency calls for help from this adoptive dad today.