Q: We have been tentatively matched with a four-year-old through foster care adoption, and have been told to prepare to have the child move in with us soon. How do we do this? We are especially worried about that first day with the child in our home. Have you found any ways to make that first day easier on the child? We have kid-friendly food ready to offer, but are not sure what else to do.

“It depends whether the child just entered care or has been in a safe, stable home for awhile (or has moved through several unstable homes). I think the number one thing is to demonstrate through your actions that your home is safe, calm, and predictable. Don’t worry about saying the right thing, having the right foods, or setting up the perfect room. A predictable routine teaches the child that he or she can trust you. Above all, don’t force it.”

“Know that you are starting a loving, wonderful relationship, and let your actions follow. I tried to keep the first 24–48 hours immediate family only, and introduced the extended family over the next month. We didn’t start preschool for a month or two, and delayed our EIP evaluation for two months, to give our girls some time to ‘settle in.’ Play some simple games, color, read, do some puzzles. Eat food that your child likes—pasta, chicken, fries, soup. And, at night, before you go to bed, be sure to record your memories of that first day!”

“My best advice is don’t overdo it. It is easy to feel like you have to cram a whole bunch of fun into the first day. But it is all very overwhelming to the child. Let him get acclimated to his new room. Then, just hang out. Even if he has had several placements, this may be the first one that could be permanent. The pressure is exhausting for a four-year-old. Good luck and enjoy!”

“Keep it simple. Stay home. Resist the urge to turn on the TV. My six-year-old attended school, as per her usual routine. Then I sat on the floor with our new child and had simple toys available—blocks, coloring, dollies, tea set, puzzles. The most important item ended up being a toy phone. When she asked for her previous foster parent, I suggested, ‘Why don’t you give her a call?’ She ‘called’ multiple times on the toy phone and gave reports of what she was doing, what we ate, and so on. Throughout the day, I also told her what was coming up next (e.g., next we’ll have lunch, then we’ll pick up your sister from school, after dinner it’s bathtime, etc.), so she could anticipate transitions. I think that really helped with the ‘what will they do with me next’ fears.”

“We adopted a sibling group. After we brought the kids home, we introduced them to our dogs, gave them a tour of the house and their rooms, then helped them put away their stuff (we gave them the option of unpacking, and they choose to do so). They chose a restaurant they liked and we picked up dinner and dessert. After dinner, my husband played video games with the older kids and I colored with our youngest. This let them focus on something else, but still have some interaction with us. Then they bathed and it was time for bed. Bedtime took nearly two hours that first night, so I would definitely say to expect it to take much longer than you think it will. Even though it was clear they were exhausted, they all had a hard time settling down. One thing that really helped: We got a baby monitor (we call it their ‘communicator’) that lets the parents respond from their unit and we placed it in the hallway outside their rooms. I definitely suggest one, even if your rooms are close. It seemed to comfort them a lot.”

“If they are leaving a foster home or a safe birth family situation, the child might find it comforting to call to say, ‘We arrived OK.’ Don’t have a lot of folks over. Ask a previous caregiver if the child has a favorite dinner, and make that. Don’t go overboard giving him or her new things (start as you mean to go). Depending on age, putting a new stuffed animal on her bed might be nice.”

“I would agree on taking it easy for at least the first week, or even two. If you make a big deal out of it that first day, the child will expect fun and games every day. Maybe plan to take the child to a favorite restaurant for dinner or make the child’s favorite meal at home. After that initial period has passed, you can plan a small family get-together for close relatives to meet him or her.”

“We kept things very simple when our daughter joined us at age six. It was the middle of the summer, so my husband and I took some time off of work and called it ‘family summer camp.’ We got into home routines and went to a lot of parks. We didn’t do a lot of visiting with others or high-input activities (like theme parks), just took the time to calmly and quietly build our bonds.”

From the January 2018 Issue 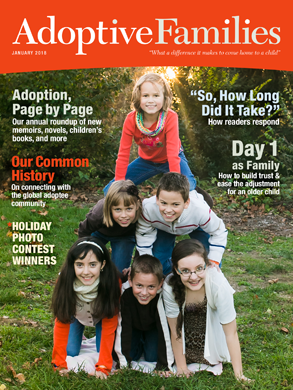 "When we adopted this sibling group of four, it was so crucial that they stay together. This picture shows the challenges of loving one another and symbolizes the fact that adoption only works with a solid base in place for the children." —DAVID