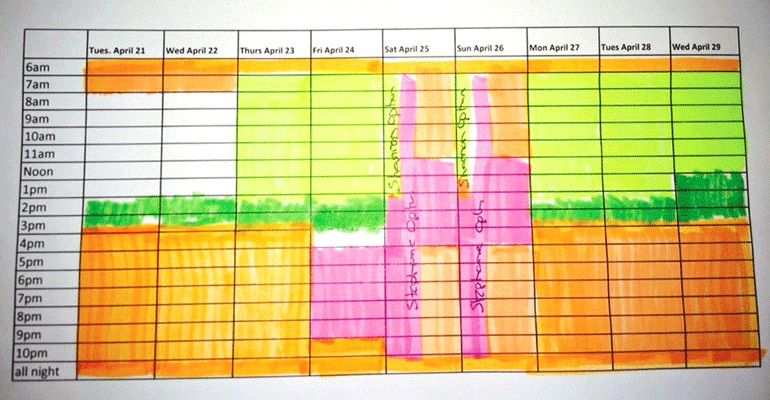 We officially became a waiting family in mid-March. Our agency has a high percentage (around 50 percent) of emergency placements—when the agency is contacted by a hospital on behalf of a woman who has just delivered and has decided to make an adoption plan. The general process for the adoptive family is the same; it is just at a faster pace with very little notice.

Because of this, our agency requires families to go on hold during times they are unavailable for placement. My mother was ready to be our main source of child care for our two boys when we got the call, but there were nine days in late April when she was going to be away. I didn’t want to go on hold, so I was determined to find round-the-clock coverage for those nine days.

Ta-Da! The chart pictured above is where my mad organization and color-coding skills came in handy. I assigned each available babysitter a different color. On any given day, at any time, I could immediately see which person would be able to watch the boys.

You might think, “That is a lot of work to put into something you are very unlikely to need.” True. What is the chance that, during a wait that could stretch to a year or longer, this would be the week we’d get picked—and for an emergency placement, no less? But this exercise made me feel better, and, more important, it revealed that our “village” was large enough that we probably wouldn’t need to go on hold. When I posted the picture of my chart on Facebook, I had a friend ask me who was covering the white section early in the week. When I replied that we didn’t have coverage for those hours, she said, “Mark me down!” With that final bit of generosity we filled our potential child care needs so that we could remain an active waiting family…and it’s a good thing we did.

On Monday, April 27, at 3:40 p.m. I had a knock on the door of my office and my social worker, Ashley, walked in. (I work at the agency we are adopting through, so having our social worker come to my office isn’t as shocking as it sounds.) She said, “OK…this is it.” Honestly, I had no idea what she meant. When I noticed that she had brought in the new social worker, who was being trained, and shut my door, I became worried, but still didn’t connect her words with my personal adoption process.

Even though I knew we could be picked any day, I didn’t think it would happen so quickly. And I definitely didn’t think my babysitter chart would actually need to be used. It finally clicked for me when Ashley said, “So, do you remember when you said this would be the worst week for you to get picked by an expectant mother? Well, guess what?” I’m embarrassed to say that the trainee social worker was exposed to tears, giggles of excitement, and quite a few curse words.

Ashley started rattling off all the details: when the baby was born, her height and weight, the hospital name, background on the birth parents, and tons of additional information (none of which I retained, so I’m glad she put it all in writing). She concluded with, “and you will need to leave at 6:30 tomorrow morning to make to the hospital in time to meet the birth mother’s social worker.”

I’d spent the last 10 years working at this agency and hearing how wonderful getting the call was, but it still didn’t feel real, like it was really happening…to me. To us; “Oh, that’s right, I have to call Dave,” I thought. I caught my husband just before his 4 o’clock client arrived. He was as shocked as I was.

Finally, it was time to consult my babysitter chart. Despite my panic and excitement, I’m proud to say my chart was perfectly clear. I called the person who had signed up for that afternoon, then the next day’s babysitters. Then, as I ran to my car, I started calling family members. With each new person with whom I shared the news, it became more real.

I ran from store to store, grabbing everything on my list. After Dave came home from work and we put the kids to bed, we opened the bin in the basement marked “infant” and started to run all the clothes through the laundry. We threw the travel crib in the car, hooked up the car seat, and settled into bed around 1:00 a.m.

Our early-morning babysitter arrived and we headed out. Were we really ready? The whole ride to the hospital felt surreal—and ended abruptly. We pulled into the parking lot, greeted the birth mother’s social worker, and, minutes later, were heading up the elevator to the nursery to meet our daughter….