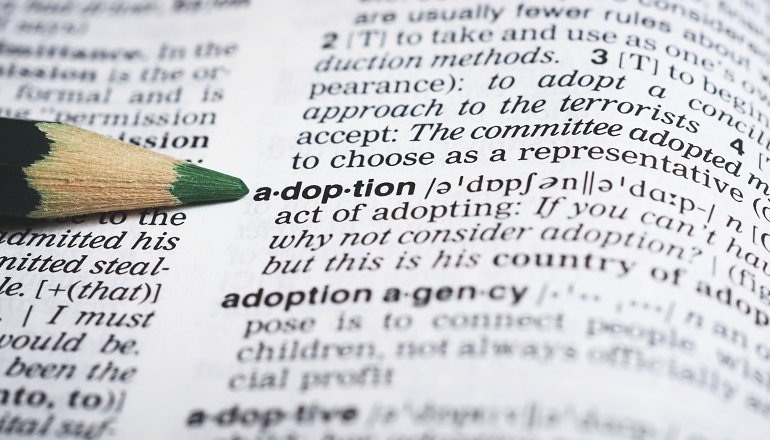 Adoption jargon is imprecise; a term can have one meaning when used by a particular social worker, attorney, or agency, another when used by someone else. In international adoption, foreign languages add to the confusion. As you work on your adoption, never hesitate to ask, “What exactly do you mean by that?”

Adoptee. A person who was adopted. Some people prefer the terms “adopted child” or “adopted person.”

Adoption. The complete transfer of parental rights and obligations from one parent or set of parents to another. A legal adoption requires a court action.

Adoption agency. An organization, usually licensed by the state, that provides services to birth parents, adoptive parents and children who need families. Agencies may be public or private, secular or religious, for profit or nonprofit.

Adoption attorney. A lawyer who files, processes, and finalizes adoptions in court. In some states attorneys may also arrange adoptive placements.

Adoption consultant. An individual who helps would-be adoptive parents decide on an adoption path, and assists in choosing an appropriate agency or attorney.

Adoption facilitator. An individual whose business involves connecting birth parents and prospective adoptive parents for a fee (allowed in only a few states). In international adoption, a facilitator may help adoptive parents complete an adoption in the child’s country of origin.

Adoption plan. Birth parents’ decision to allow their child to be placed for adoption.

Agency adoption. Adoptive placements made by licensed organizations that screen prospective adoptive parents and supervise the placement of children in adoptive homes until the adoption is finalized.

Birth parent. A child’s biological parent who has signed a consent to adoption. A pregnant woman who is considering adoption should not be called a “birth mother,” even if she has indicated her intent to place the child for adoption.

Confidentiality. The legally required process of keeping identifying or other significant information secret. Also, the principle of ethical practice that requires social workers and other professionals not to disclose information about a client without the client’s consent.

Decree of adoption. A legal order that finalizes an adoption.

Disruption. An adoption process that is halted after the prospective adoptive parents have taken custody but before legally finalization.

Dissolution. An adoption in which the parent-child legal relationship is severed after finalization.

Dossier. A set of legal documents used in international adoption to process a child’s adoption or assignment of guardianship in a foreign court.

Emergency placement. An adoption match that is made after the child has already been born. Also referred to as a “baby-born situation,” “hospital match,” or “stork-drop.”

Expectant mother. A woman who is pregnant and considering adoption for her child after she gives birth.

Finalization. The final legal step in the adoption process; involves a court hearing, during which a judge orders that the adoptive parents become the child’s legal parents.

Foster parents. State- or county-licensed adults who provide a temporary home for children whose birth parents are unable to care for them.

Hague Adoption Convention. The Convention on Protection of Children and Co-Operation in Respect of Intercountry Adoption, an international treaty to improve accountability, safeguards, and cooperation in inter-country adoption. Its terms govern adoption among almost 80 countries, including the U.S.

Hard-to-place. Children whom agencies consider difficult to place because of emotional or physical disorders, age, race, membership in a sibling group, history of abuse, or other factors.

Home study. A process through which prospective adoptive parents are educated about adoption and evaluated to determine their suitability to adopt.

ICPC. The Interstate Compact on the Placement of Children (ICPC) is statutory law that establishes uniform legal and administrative procedures governing the adoption of children between states within the U.S.

Identifying information. Information on birth parents or adoptive parents that discloses their identities.

Independent adoption. An adoption facilitated by other than an adoption agency.

Kinship adoption. Adoption by a biological relative of the child.

Legal guardian. A person who has legal responsibility for the care and management of a person (such as a minor child) who is incapable of administering his or her own affairs.

Legal risk placement. Placement of a child in a prospective adoptive family when the child is not yet legally free for adoption.

Open adoption. An adoption that involves some amount of initial and/or ongoing contact between birth and adoptive families, ranging from sending letters through the agency to exchanging names and/or scheduling visits.

Photo listings. Photos and descriptions of children who are available for adoption.

Placement. The point at which a child begins to live with prospective adoptive parents; the period before the adoption is finalized.

Post-placement supervision. The range of counseling and agency services provided to the adoptive family after the child’s placement and before the adoption is finalized in court.

Readoption. For a child adopted in another country, a second adoption in a U.S. court.

Referral: The document that identifies a child available for international adoption.

Reunion. A meeting between an adopted person and birth parents or other birth relatives.

Search. An attempt to locate and/or make a connection with a birth parent or a biological child.

Semi-open adoption. An adoption in which a child’s birth parents and adoptive parents may meet once or twice, but exchange only nonidentifying information.

Special-needs children. Children whom agencies consider difficult to place because of emotional or physical disorders, age, race, membership in a sibling group, history of abuse, or other factors.

Transracial adoption. An adoption in which the child and the adoptive parent(s) are not of the same race.

Waiting children. Children in the public child welfare system who cannot return to their birth homes and need permanent, loving families to help them grow up safe and secure.